walking in the sunshine or “the bogs of Shanaheever”

04 Jan walking in the sunshine or “the bogs of Shanaheever”

Posted at 15:57h in out and about by Silvana 0 Comments
0 Likes
Share

sunshine splitting the rocks, no excuse to work,

quickly preping a lunchbag and tea,

and there we are:

while we we walk along Lough Shanaheever and Louch Auna,

though the stunning scenery of  Connemara bogland,

Stephen surprises me  with a folksong about this valley At the end of the road we find a megalithic tomb, with its intact headstone 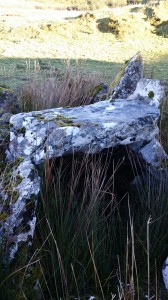 surrounded by ancient whitethorn trees, which are often indicators for old settlements. we had our lunch on a huge rock in full sunshine

…and beleave me, you don’t get this at the sales!!!

Sorry, the comment form is closed at this time.